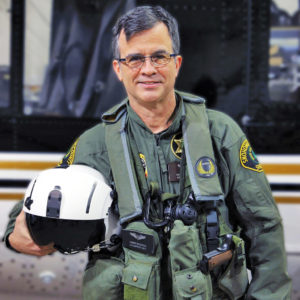 On March 24, 2018, several hundred friends and colleagues came together to honor and recognize Sgt. Danny Wikstrom and his many years of service to our community. Here is just some of his story, along with a very moving tribute from a long-time search and rescue volunteer.

Danny was raised in Sequim, WA and he joined the Sheriff Explorers there at age 14. At 18 years of age he became a dispatcher and reserve police officer with the Sequim Police Dept. One day his friend and fellow officer said he was going to take the exam to apply to the Snohomish County Sheriff’s Office for work. He said Danny should come along and apply as well. Danny asked, “Where is Snohomish County?” His friend said near Everett. Then Danny asked, “Where is Everett?” and his friend said near Seattle. Off they both went to take the exam, and both were hired. Now 35 years later Danny is retiring from law enforcement, with about 21+ of those years spent with Snohomish County Volunteer Search and Rescue.

It would take a book to tell you about Danny’s career with the Snohomish County Sheriff’s Office. We will take editorial license and condense it. Danny worked as a Patrol Deputy, Forest Deputy, Burglary/Robbery Detective, Vice Unit Detective, Narcotics Unit Detective, Patrol K9 Deputy, SWAT, Defensive Tactics Instructor, promoted to Sergeant and returned to Patrol. He loved nearly every day of work. Danny returned to Narcotics as a unit sergeant and then returned to Patrol as a sergeant at the East Precinct followed by the South Precinct working graveyard.

John Taylor was the SAR Sgt. and had been diagnosed with Parkinson’s Disease. Sgt. Taylor called Danny to recruit him as his replacement. Danny trained with John during the summer then returned to patrol for a few months until John retired. Danny became the SAR sergeant and K9 sergeant while still working as the SWAT commander. He was constantly getting called for one of these duties and was challenged to juggle it all. After consulting with his Chief, the Chief decided to have him leave SWAT and eventually he left K9 as well. So, Danny was the SAR Sgt. (which evolved into the SAR/Air Support Unit Sgt.) and here we are about 21+ years later celebrating Danny’s career.

Over his many years of service to search and rescue, Danny has had a singular goal – to bring home the injured, the lost, and the missing. He has truly been the embodiment of our motto “That Others May Live”.

One of our long time SAR members, Mike Loney, summed up Danny’s career at his retirement celebration with a touching tribute. Here is what Mike said:
“I don’t have a lot of stories and memories to tell about Sergeant Danny Wikstrom today, I just want to share my reflection about his time in SAR and what he leaves behind as he retires.

During my time in SAR under Danny, if there was ever a time when I or others felt like we were too important, or our idea was the only important one, Danny would bring you back down to earth by saying “the graveyard is full of people who thought they were irreplaceable”.

What he meant of course was you’re not so important, you could be replaced by someone, and the job will move on.

Well once in a while there is someone you look at like Danny and you say, “that person just might really be irreplaceable”.

So how do you replace that person? Of Danny, we say, those are some really big shoes to fill. How do we fill those shoes?

The answer is that it’s within each one of us.

Over all those 22 years in SAR – on missions, saving lives, helping change outcomes of people in trouble out in the woods, and even having to break the hearts of some families with the worst news, Danny was also always coaching us, always teaching us, always mentoring us. And sometimes, cajoling and pushing you into a job you were not comfortable with, and then helping you to get it done.

So, a little bit of Danny is still going to be in SAR forever. And that’s how you replace Danny, with a little bit of the Danny in each one of us. And as SCVSAR members move forward over the years, when new members come in, you need to take a little bit of that Danny that’s in you and share it with the next generation.

When that pager goes off tonight, or tomorrow, or next week, or next year and beyond, some SCVSAR member in this room is going to get up, fill those really big shoes, and walk down that dark trail, and then step off that trail into the unknown and get the mission done.”

So, as we wish Danny well in his retirement, we are pleased that commitment to service goes on. Danny will continue to volunteer as Crew Chief with our Helicopter Rescue Team. See you at the next mission, Sgt. Wikstrom!